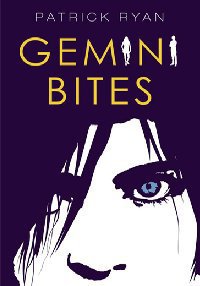 Add Ryan to the list of authors still finding fresh ways to keep vampire books immortal. Narrated by 16-year-old twins Kyle and Judy Renneker—who have recently announced they are gay (Kyle) and born-again (Judy)—Ryan’s story smartly navigates romantic entanglements and sibling rivalry. Already overstuffed with seven children, the Renneker household is getting another addition: Kyle and Judy’s classmate Garret Johnson, who will be staying with the family for a month before moving to San Diego with his parents. Oh, and pale, eyeliner-wearing, and oddly formal Garret claims he’s a vampire, which Kyle starts to believe might be true (even as he acknowledges this isn’t the sole reason Garret intrigues him). Garret’s presence ratchets up Kyle and Judy’s combative relationship, while a subplot involving a student who believes Garret is “evil” adds an undercurrent more unsettling than any potential vampirism. Writing with humor and empathy in equal measure, Ryan (In Mike We Trust) presents a touching gay romance as well as a pair of well-rounded and entertaining narrators who come to respect each other.

Sparks fly when the mysterious, smooth-talking, eye-liner’d Garret Johnson moves in for a month with the very Bradylike household of sparring twins Kyle and Judy Renneker. It’s unclear at the outset as to why the twins hate each other so much—all readers know is that Kyle is openly gay and Judy is seemingly pursuing a cute boy by carrying around a Bible. Garret, however, is an artist-in-training who wears all black and has strange phone conversations with someone he claims is his vampire mentor. Both twins seem dubious, but he somehow manages to seduce them into modeling for his sketches in various stages of undress. Soon, the twins are at each other’s throats trying to decide which one he likes the best. What Ryan loses in hackneyed plotting he makes up for in character development. Garret, Kyle and Judy, as well as the rest of the Renneker family, are all sharply portrayed, and readers will definitely feel a sense of belonging as they read their story. Ryan also injects plenty of lusty longing and (mostly tame but for the language is) seduction scenes that will keep readers on the edge of their seats. The conclusion isn’t quite as much fun as the characters’ journeys, but readers will definitely have lots to think about once they’ve finished.

One of the strangest (and funniest) love triangles ever to hit YA fiction, when a pair of twins (one boy, one girl) both fall for the boy who moves in with them…who may or may not be a vampire.

Judy and Kyle Renneker are sixteen-year-old fraternal twins in a rambling family of nine. They have a prickly history with each other and are, at least from Judy’s perspective, constantly in fierce competition. Kyle has recently come out of the closet to his family and feels he might never know what it’s like to date a guy. Judy, who has a history of pretending to be something she isn’t in order to get what she wants, is pretending to be born-again in order to land a boyfriend who heads his own bible study.